The File Detection Test is one of the most deterministic factors to evaluate the effectiveness of an anti-virus engine. These test reports are released twice a year including a false alarm test. For further details please refer to the methodology documents as well as the information provided on our website. In this test, the following 20 up-to-date Security Products were tested using 136610 prevalent malware samples.

Each test system is running on Microsoft Windows 7 64-Bit including a respective security product, which was last updated on the 28th February 2013. The malware sets were frozen on the 22th February 2013. Most products run with highest settings by default. Certain products switch to highest settings automatically when malware is found (e.g. Avast, Symantec, Trend Micro, etc.). This makes it impossible to test against various malware with real “default” settings. In order to get comparable results we set the few remaining products to highest settings or leave them to lower settings – in accordance with the respective vendors. We kindly ask vendors to provide strong settings by default, i.e. set their default settings to highest levels of detection (e.g. AVIRA, Kaspersky, etc.), esp. for scheduled scans or scans initiated by the user. This is usually already the case for on-access scans and/or on-execution scans (e.g. ESET and Kaspersky use higher heuristic settings when files are executed). We allow the few remaining vendors (which do not use highest settings in on-demand scans) to choose to be tested with higher setting as they e.g. use in on-access/on-execution higher settings by default, so the results of the file detection test are closer to the usage in the field (as on-access the settings are higher). We ask vendors to remove paranoid settings inside the user interface which are too high to be ever of any benefit for common users (e.g. AVG, F-Secure, Sophos, etc.). Below are some notes about the settings used (scan all files, scan archives, scan for PUA, scan with cloud, etc. is always being enabled):

The test-set used has been built consulting telemetry data with the aim of including prevalent malware samples from the last weeks/months prior to the test date which are/were endangering users in the field and consisted of 136610 samples. Furthermore, the distribution of families in the test-set has been weighted based on family-prevalence and was build based on Microsoft’s global telemetry data. This means that as more prevalent a malware family is, as more samples from that family are included in the test-set.

The malware detection rates are grouped by the testers after looking at the clusters build with the hierarchal clustering method. By using clusters, there are no fixed thresholds to reach, as the thresholds change based on the results. The testers may group the clusters rationally and not rely solely on the clusters, to avoid that if e.g. all products would in future score badly, they do not get high rankings anyway.

The test-set used contained 136610 recent/prevalent samples from the last few weeks/months. We estimate the remaining error margin on the final percentages to be below 0.2%.

The graph below shows the test results against a “out-of-box” malware detection provided by Microsoft Windows. In Windows 8, this is provided by Windows Defender, which is pre-installed by default with the operating system. The equivalent in Windows 7 is Microsoft Security Essentials, which is not pre-installed, but can easily be added for free as an option via the Windows Update service. We use this to compare the value of this feature – i.e. static malware detection – provided to users of third-party Anti-Virus solutions. This comparisons will from now on be provided also in other tests, like e.g. monthly for our Real-World Protection Tests (for products participating in public main test-series) available on our website.

Details about the discovered false alarms (including their assumed prevalence) can be seen in a separate report available at: http://www.av-comparatives.org/wp-content/uploads/2013/03/avc_fp_mar2013.pdf 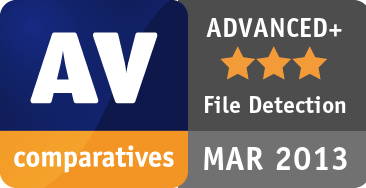 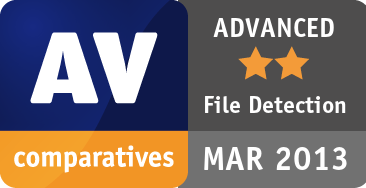 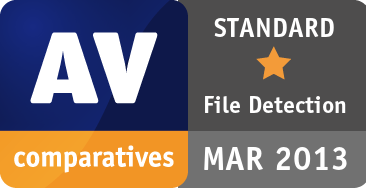 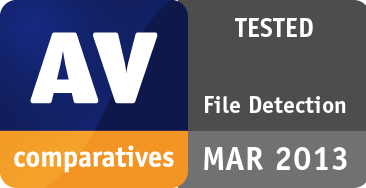 We added Symantec Norton in this test, even if they did not apply for being included into our test-series, as the results have been highly demanded by our readers and the press.