Although we tested Microsoft Defender, we cannot provide results for it. During the testing, despite being configured for automatic updates and performing manual updates, parts of Defender were not correctly updated. As there were no error messages, this issue was only discovered at the beginning of June and required a new installation of the OS.

The tested products had to defend against over 736 recent and prevalent malicious programs, downloaded from the Internet. They were assigned one of four possible award categories, according to how well they performed in the test. From lowest to highest, the categories are: Tested, Standard, Advanced, and Advanced+.

The Consumer Real-World Protection Test checks each security product’s ability to protect a PC against threats originating on the Internet. The tested products can use all of their protection mechanisms, such as URL blockers, reputation services, cloud signatures and behavioural detection.

To ensure that the anti-malware programs do not plague the user with false alarms, a false-positives test is included in the Real-World Protection Test. This involves downloading and executing harmless program files, and browsing to harmless websites, to check if any of these are incorrectly identified as malicious. Products with above-average levels of false alarms have their award level downgraded.

The Consumer Real-World Protection Test is part of AV-Comparatives’ Main Test Series for consumer products. The Test Series also includes the Malware Protection Test and the Performance Test. The former checks the ability of antivirus products to protect against malicious files already on the system, or coming from an external drive or over the local area network. The Performance Test checks what effect each product has on the speed of the PC. Together with the Real-World Protection Test, these tests provide an all-round view of a security product’s technical capabilities.

Like all AV-Comparatives’ public reports, the report of the 2021 H1 Consumer Real-World Protection Test can be downloaded free of charge from the institute’s website, www.av-comparatives.org. AV-Comparatives is an independent testing lab based in Innsbruck, Austria, and has been publicly testing computer security software since 2004. It is ISO 9001:2015 certified for the scope “Independent Tests of Anti-Virus Software”. It also holds the EICAR certification as a “Trusted IT-Security Testing Lab”. 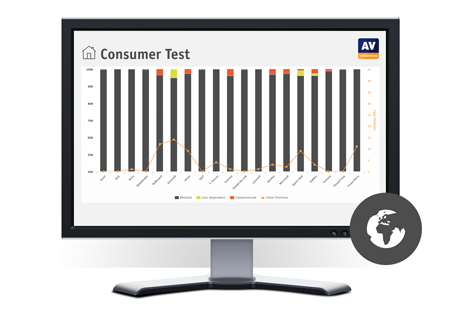