The Malware Protection Test is an enhancement of the File Detection Test which we performed in previous years. It assesses a security program’s ability to protect a system against infection by malicious files; what is unique about this test is that in addition to checking detection in scans, it additionally assesses each program’s last line of defence. Any samples that have not been detected e.g. on-access are executed on the test system, with Internet/cloud access available, to allow features such as behavioural protection to come into play.

If a product does not prevent any changes being made by a particular malware sample, or reverse all the changes made by within a given time period, that test case is considered to be a miss. If the user is asked to decide whether a malware sample should be allowed to run, and in the case of the worst user-decision the system will be compromised, we rate this as “user-dependent”.

The test set used for this test consisted of about 38000 malware samples, assembled after consulting telemetry data with the aim of including recent, prevalent samples that are endangering users in the field. Malware variants were clustered, to build a more representative test-set (i.e. to avoid over-representation of the very same malware in the set). AV-Comparatives gets up to 300,000 new samples per day, but most of the samples are just variants of the very same thing (they just have different hashes), or are unsuitable for the test (as they e.g. do not work on an up-to-date Windows 10 system). Our aim in collecting samples for the test set is quality rather than quantity.

The current test helped several vendors to find and fix previously unknown bugs in their products.

A breakdown of the malware types used in our test set is shown in the graphic below. The stats are generated using Microsoft’s naming scheme. 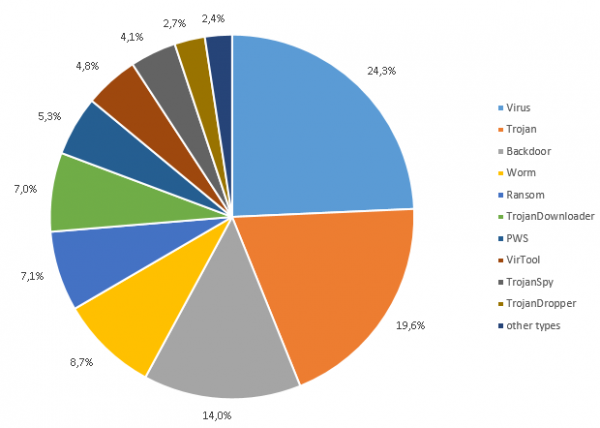 The table below shows the most common families of each type of malware in the test set: