Leading IoT testing lab AV-Comparatives has published results of its Router Security Test 2020, which was commissioned by the German computer periodical PC Magazin. A critical part of a smart-home setup, the home router is the hub via which computers, smartphones, tablets, and smart-home devices connect to the Internet. As such, it is a key point in protecting the family’s home network from cyber-threats.

Some modern routers advertise protection against typical Internet threats such as phishing and other malicious websites, malware (malicious programs), and content unsuitable for children. AV-Comparatives put the 5 routers to the test with regard to their ability to filter out such content.

As well as testing functions designed to block these Internet-borne menaces, the test looked at the routers’ ability to keep targeted hacker attacks out of the home network. There is a detailed assessment of router password requirements (how long and complex they need to be) for each router, as this is a critical part of keeping intruders out. Likewise, Wi-Fi security, including the different encryption methods for securing the wireless network, was scrutinised by AV-Comparatives. Additional security aspects covered by the report include notifications, firmware updates, administration from the local network and across the Internet, security of guest networks, firewall ports opened, virtual private networks, and associated smartphone apps. Features for file-sharing and media servers were also examined.

The report shows that there are significant differences in the security features offered by the 5 tested routers. Some allow weak passwords such as “password”, or passwords with only one character. The test also shows the limitations of malware protection features provided by the routers. Like all AV-Comparatives’ publications, the report of the router test is available to download for free from AV-Comparatives’ website. 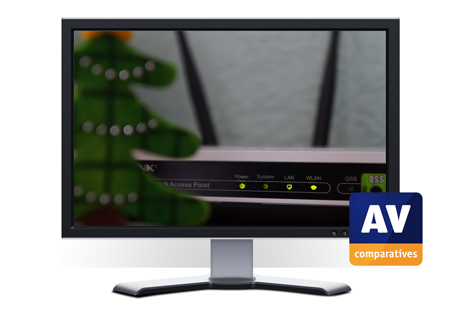