Malicious software poses an ever-increasing threat, not only due to the number of malware programs increasing, but also due to the nature of the threats. Infection vectors are changing from simple file-based methods to distribution via the Internet. Malware is increasingly focussing on users, e.g. by deceiving them into visiting infected web pages, installing rogue/malicious software, cyber espionage, ransomware or opening emails with malicious attachments. The scope of protection offered by antivirus programs like signatures and heuristics is extended by the inclusion of e.g. URL-blockers, content filtering, reputation systems, cloud based methodologies and user-friendly behaviour-blockers. If these features are perfectly coordinated with the signature-based and heuristic detection, the protection provided against threats increases. However, we would recommend that all parts of a product should be as effective as possible. It should be borne in mind that not all malware enters computer systems via the Internet, and that e.g. a URL blocker is ineffective against malware introduced to a PC via a USB flash drive or over the local area network.

We congratulate the four vendors who participated in this test for having their business products publicly tested by an independent lab. We invited a number of other vendors to participate in this test, but they declined, mostly as they already have their consumer products thoroughly tested by us, and these results are likely to be similar to those for their corresponding business products.

The following products have been reviewed/tested with default settings under Windows 10 64-bit:

In this test, the protection offered by the products has been evaluated. The tests were performed from September till October 2016.

The following tests were performed:

RTTL: 500 most prevalent malicious samples according to the AMTSO Real-Time Threat List (RTTL) were executed on the system.

AVC: 500 most recent and prevalent malicious samples from our own database were executed on the system.

WPDT: 50 malicious websites were tested by using our Real-World Testing Framework, which simulates the activities of a typical computer user (whether at home or in the office) surfing the Internet.

FPs: a false alarm test in which 1000 clean files have been executed on the system has also been performed. The false positive test measures the ability of products to distinguish clean from malicious files.

Exploit Test: 21 exploits have been used in the Exploit test.

Testing Cycle for Each Test Case

The following hardware was dedicated to the virtual machine:

The VirtualBox host and guest system for the exploit test has been hardened in a way that common virtualization and sandbox detection techniques cannot detect the system as an analysis system.

Unfortunately, the time of the test and OS configuration was not in favor for the exploit test. At the time of the tests, two exploit kits dominated the Internet. Sundown and RIG. Unfortunately, RIG used old (mostly Flash) exploits, which was unable to exploit the test configuration at all. That is why it was important to test with Metasploit and with some not super-fresh, but not too-old exploit kits as well (Neutrino).

We also used two sample, which is not an exploit itself, but rather a non-PE downloader, like an Office macro and a WSF downloader. We added these into the mix because these “egsotic” file types are often excluded from Real World tests, but meanwhile, prevalent in-the-wild.

A total of 21 test cases have been tested.

For the exploit test part, the following vulnerable software was installed:

Scoring Of The Exploit Protection/Detection Results

We defined the following stages, where the exploit can be prevented by the endpoint protection system:

The “protection” scoring of the results was calculated as the followings:

The “detection” scoring of the results was calculated as the followings:

We used this scoring for the following reasons:

We believe that such zero-tolerance scoring helps enterprises to choose the best products, using simple metrics. Manually verifying the successful remediation of the malware in an enterprise environment is a very resource-intensive process and costs a lot of money. In our view, malware needs to be blocked before it has a chance to run, and no exploit shellcode should be able to run.

Scoring of the Malware Protection Results

Scoring of the False Positive Test

The same scoring principle as described above has been applied for the false alarms test. In this test, 1000 non-malicious applications have been used.

The following chart shows the results of the malware protection test. 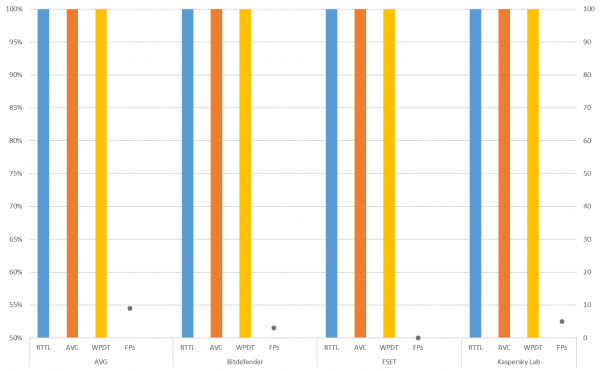 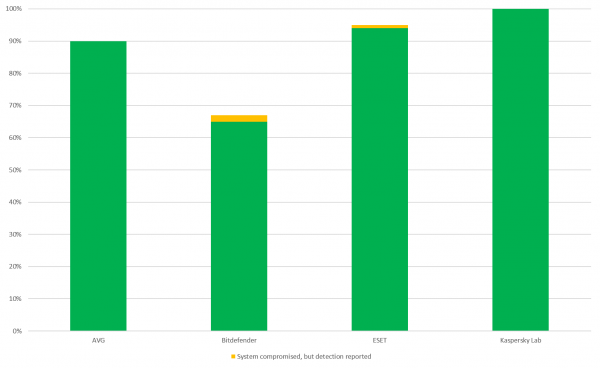 Award levels reached in this Business Security Tests and Review 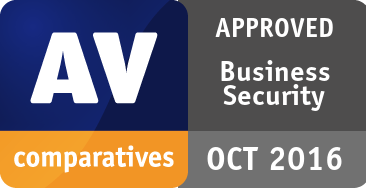 AV-Comparatives is a vendor-independent organization offering systematic testing that checks whether security software such as PC/Mac-based antivirus products and mobile security solutions lives up to its promises. Using one of the largest sample collections worldwide, AV-Comparatives create real-world environments for accurate security tool testing offering freely accessible results to individuals, media and scientific institutions. Certification by AV-Comparatives provides an official seal of approval for software performance which is globally recognized. Currently, the Real-World Protection Test is the most comprehensive and complex test available when it comes to evaluating real-life protection capabilities of antivirus software. For this purpose, AV-Comparatives runs one of the world largest IT security testing frameworks in a data centre located in Innsbruck.

The methodology of AV-Comparatives’ Real-World Protection Test has received the following awards and certifications, including:

AV-Comparatives’ Management System is ISO 9001:2008 certified. The certification has been received from TÜV Austria for the management system with scope “Independent Tests of Anti-Virus Software”.

The data centre where AV-Comparatives runs the test equipment is ISO 27001:2013 certified.

MRG Effitas is a UK based, independent IT security research organisation which focuses on providing cutting edge efficacy assessment and assurance services, supply of malware samples to vendors and the latest news concerning new threats and other information in the field of IT security.

MRG Effitas’ origin began when the “Malware Research Group” was formed in 2009 by Sveta Miladinov, an independent security researcher and consultant. In June 2009, Chris Pickard, joined, bringing expertise in process and methodology design, gained in the business process outsourcing market.

The Malware Research Group rapidly gained a reputation as being the leading efficacy assessor in the browser and online banking space and due to increasing demand for its services, was restructured in 2011 and became “MRG Effitas” with the parent company “Effitas”.

Today, MRG Effitas has a team of analysts, researchers and associates across EMEA, USA and China, ensuring a truly global presence.

MRG Effitas is recognised by several leading security vendors as being the leading testing and assessment organisation in the online banking, browser security and cloud security spaces and has become the partner of choice.

This publication is Copyright © 2016 by AV-Comparatives ®. Any use of the results, etc. in whole or in part, is ONLY permitted after the explicit written agreement of the management board of AV-Comparatives prior to any publication. This report is supported by the participants. AV-Comparatives and its testers cannot be held liable for any damage or loss, which might occur as result of, or in connection with, the use of the information provided in this paper. We take every possible care to ensure the correctness of the basic data, but a liability for the correctness of the test results cannot be taken by any representative of AV-Comparatives. We do not give any guarantee of the correctness, completeness, or suitability for a specific purpose of any of the information/content provided at any given time. No one else involved in creating, producing or delivering test results shall be liable for any indirect, special or consequential damage, or loss of profits, arising out of, or related to, the use or inability to use, the services provided by the website, test documents or any related data.