“Next Generation” is a vague term used to describe security products that work on a different principle from traditional antivirus software. Currently these are available mainly for business networks rather than home users. They may work by monitoring incoming traffic on the network, as is the case for the Barracuda NextGen Firewall, or by installing client software which is managed and monitored centrally from a console, as is the case for the other products we have reviewed here. The latter type is intended to replace the antivirus software on client PCs, while the former could still be used in conjunction with traditional AV products.

This report marks the first time AV-Comparatives has tested and included next-generation security products in a public comparative test report. We had reached out to many leading vendors in this space, requesting their participation in the test. Unfortunately, a number of vendors refused to participate in this independent evaluation. Since their products could not be included in this public report, we are unable to approve them as valuable next-generation security products. We look forward to their future participation in independent tests.

The following products have been reviewed/tested under Windows 10 64-bit and are included in this public report:

Testing Cycle for Each Test Case

The endpoint systems were installed with the default configuration, potentially unwanted software removal was enabled, and where the option was provided during the installation, cloud/community participation was enabled.

The following hardware was dedicated to the virtual machine:

The VirtualBox host and guest system for the exploit test has been hardened in a way that common virtualization and sandbox detection techniques cannot detect the system as an analysis system.

All tests were performed with an active Internet connection (i.e. with cloud connection). We tested the products reviewed here as follows:

Some vendors made configuration changes to their products remotely before the tests. Protection relevant changes were as follows:

Unfortunately, the time of the test and OS configuration was not in favor for the exploit test. At the time of the tests, two exploit kits dominated the Internet. Sundown and RIG. Unfortunately, RIG used old (mostly Flash) exploits, which was unable to exploit the test configuration at all. That is why it was important to test with Metasploit and with some not super-fresh, but not too-old exploit kits as well (Neutrino). We also used two samples, which are not an exploit itself, but rather non-PE downloader, like an Office macro and a WSF downloader. We added these into the mix because these exotic file types are often excluded from Real World tests, but meanwhile, prevalent in-the-wild.

A total of 21 test cases have been tested.

For the exploit test part, the following vulnerable software was installed:

Scoring Of The Exploit Protection/Detection Results

We defined the following stages, at which the exploit can be prevented by the endpoint protection system:

The “protection” scoring of the results was calculated as the followings:

The “detection” scoring of the results was calculated as follows:

We used this scoring for the following reasons:

We believe that such zero-tolerance scoring helps enterprises to choose the best products, using simple metrics. Manually verifying the successful remediation of the malware in an enterprise environment is a very resource-intensive process and costs a lot of money. In our view, malware needs to be blocked before it has a chance to run, and no exploit shellcode should be able to run.

Scoring of the Malware Protection Results

Scoring of the False Positives Results

The same scoring principle as described above has been applied for the false alarms test. In this test, 1000 non-malicious applications have been used to measure the ability of the products to distinguish clean from malicious files.

Below are the results achieved by the next-gen products in the malware protection tests performed by AV-Comparatives. In general, the protection rates are quite high, and comparable with the scores reached by conventional business products. 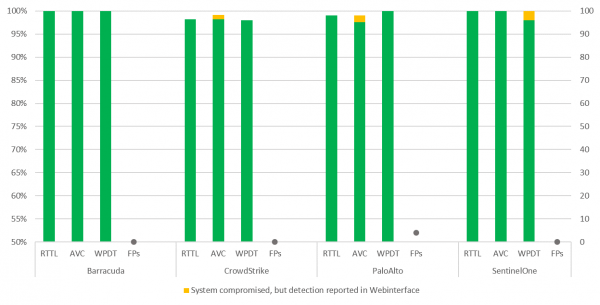 Below are the results achieved by the next-gen products in the exploit tests performed by MRG Effitas. 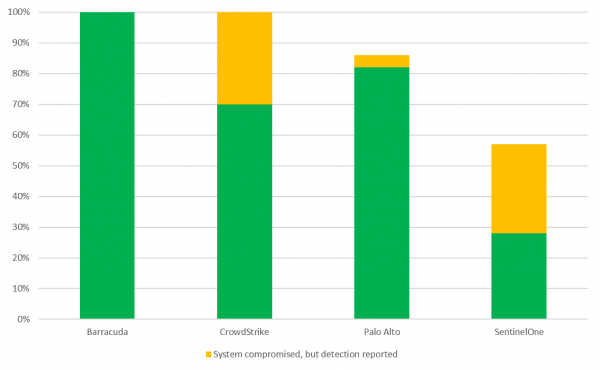 Award levels reached in this Business Security Tests and Review

The following products showed decent results in the malware protection tests without issuing too many false alarms, and receive our Approved Business Security Award: 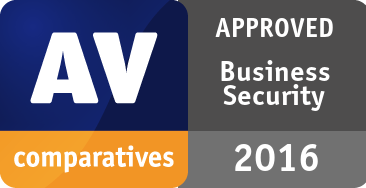 Some of the products in this review may only provide logging and analysis of threats (useful for incident response), rather than actually protecting against them. In some cases, protection features are deactivated by default and have to be enabled and configured by the administrator before they can be used. Not all of the products covered here may be available as a trial version. In fact, a few “next-gen” vendors try to avoid having their products publicly tested or independently scrutinized. To this end, they do not sell their products to testing labs, and may even revoke a license key – without a refund – if they find out or suspect that it was bought anonymously by a testing lab.

This publication is Copyright © 2016 by AV-Comparatives ®. Any use of the results, etc. in whole or in part, is ONLY permitted after the explicit written agreement of the management board of AV-Comparatives prior to any publication. This report is supported by the participants. AV-Comparatives and its testers cannot be held liable for any damage or loss, which might occur as result of, or in connection with, the use of the information provided in this paper. We take every possible care to ensure the correctness of the basic data, but a liability for the correctness of the test results cannot be taken by any representative of AV-Comparatives. We do not give any guarantee of the correctness, completeness, or suitability for a specific purpose of any of the information/content provided at any given time. No one else involved in creating, producing or delivering test results shall be liable for any indirect, special or consequential damage, or loss of profits, arising out of, or related to, the use or inability to use, the services provided by the website, test documents or any related data.