The File Detection Test is one of the most deterministic factors to evaluate the effectiveness of an anti-virus engine. These test reports are released twice a year including a false alarm test. For further details please refer to the methodology documents as well as the information provided on our website. In this test, the following 20 up-to-date Security Products were tested using 403543 prevalent malware samples.

Each test system is running on Microsoft Windows XP SP3 including a respective security product, which was last updated on the 10th of February 2011. The malware sets were frozen on the 22th February 2011. All products had Internet/cloud-access during the test and were tested using default settings. To ensure that all file recognition capabilities are used, we enabled scan of all files, scan of archives and scan for PUA in all products.

Please note: Several products make use of cloud technologies, which require an active internet connection. Our test is performed using an active internet connection. Although we do not longer show the baseline detection rates without cloud and show instead only the results with active cloud, users should be aware that detection rates may in some few cases be lower if the scan is performed while offline. The cloud should be considered as an additional benefit/feature to increase detection rates (as well as response times and false alarm suppression) and not as a full replacement for local offline detections. Vendors should make sure that users are warned in case that the connectivity to the cloud gets lost e.g. during a scan, which may affect considerably the provided protection and make e.g. the initiated scan useless. We have seen that products which rely much on the cloud may perform better in detecting PE malware, while scoring lower in detecting malware in non-PE format, like present in the “other malware/viruses” category. AMTSO has a rudimentary test to verify the proper functionality of cloud-supported products.

The test-set used has been built consulting telemetry data with the aim of including prevalent malware samples from the last weeks/months prior to the test date which are/were endangering users in the field and consisted of 403543 samples. Furthermore, the distribution of families in the test-set has been weighted based on family-prevalence and was build based on Microsoft’s global telemetry data. This means that as more prevalent a malware family is, as more samples from that family are included in the test-set.

As announced in previous reports (and applied already in the Whole-Product Dynamic Test of 2010), this year the awards for this test are given as follow: The total detection rates (with two decimal places) are grouped by the testers after looking at the clusters build with the hierarchal clustering method. The false alarms are taken into account as usual (may be applied stricter in future for “very many” and “crazy many”), but we are evaluating to change the FP rating.
By using clusters, there are no longer fixed thresholds to reach, as the thresholds change based on the various results. The testers may group the clusters rationally and not rely solely on the clusters, to avoid that if e.g. all products would in future score badly, they do not get high rankings anyway.
Users which prefer the old award system, can apply themselves the rating system based on fixed percentages, but should keep in mind that the test-set is just a subset and not an absolute set, so fluctuations of single detection rates in different tests should not be overrated. Users can look at the numbers to compare the different detections rates of products within a specific test over a set of malware.

As nowadays Windows viruses, Macro viruses and scripts are only a small group compared to the prevalent number of Trojans, backdoors, worms, etc., those subgroups are no longer listed separately. They are now counted in the group “other malware/viruses”, together with Rootkits, Exploits, etc.

The test-set used contained 403543 recent/prevalent samples from the last few weeks/months. We estimate the remaining error margin on the final percentages to be below 0.2%.

The graph below shows the test results against “out-of-box” Malware detection provided by Microsoft Defender, highlighted as the baseline.

A good detection rate is still one of the most important, deterministic and reliable features of an Anti-Virus product. Additionally, most products provide at least some kind of HIPS, behaviour-based, reputation-based or other functionalities to block (or at least warn about the possibility of) malicious actions e.g. during the execution of malware, when all other on-access and on-demand detection/protection mechanism failed.

Anti-Virus products have different scanning speeds due to various reasons. It has to be taken in account how reliable the detection rate of an Anti-Virus is; if the Anti-Virus product uses code emulation, if it is querying cloud data, if it does a deep heuristic scan analysis and active rootkit scan, how deep and thorough the unpacking and unarchiving support is, additional security scans, if it really scans all file types (or uses e.g. white lists in the cloud), etc.

Most products have technologies to decrease scan times on subsequent scans by skipping previously scanned files. As we want to know the scan speed (when files are really scanned for malware) and not the skipping files speed, those fingerprinting technologies are disabled and not taken into account here. In our opinion some products should inform the users more clearly about the performance-optimized scans and then let the users decide if they prefer a short performance-optimized scan (which does not re-check all files, with the potential risk of overlooking infected files!) or a full-security scan. 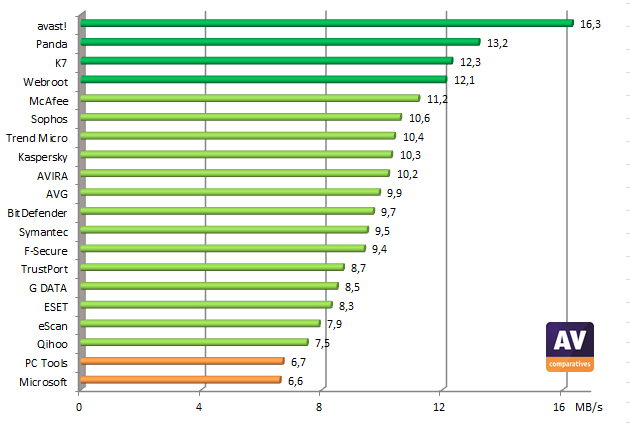 The average scanning throughput rate (scanning speed) is calculated by the size of the clean-set in MB’s divided by the time needed to finish the scan in seconds. The scanning throughput rate of this test cannot be compared with future tests or with other tests, as it varies from the set of files, hardware used etc. The scanning speed tests were done under Windows XP SP3, on identical Intel Core 2 Duo E8300/2.83GHz, 2GB RAM and SATA II disks. In 2012 we will probably no longer provide the on-demand scanning speed test inside the on-demand detection report.

In order to better evaluate the quality of the detection capabilities (distinguish good files from malicious files) of anti-virus products, we provide also a false alarm test. False alarms can sometimes cause as much troubles as a real infection. Please consider the false alarm rate when looking at the detection rates, as a product which is prone to cause false alarms achieves higher scores easier. All discovered false alarms were reported and sent to the respective Anti-Virus vendors and should now have been already fixed.

The graph below shows the number of false alarms found in our set of clean files by the tested Anti-Virus products.

Details about the discovered false alarms (including their assumed prevalence) can be seen in a separate report available at: http://www.av-comparatives.org/wp-content/uploads/2012/04/avc_fps_201102_en.pdf

AV-Comparatives provides a 3-level-ranking-system (STANDARD, ADVANCED and ADVANCED+). As this report contains also the raw detection rates and not only the awards, expert users that e.g. do not care about false alarms can rely on that score alone if they want to. 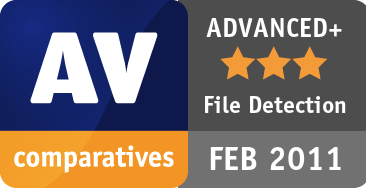 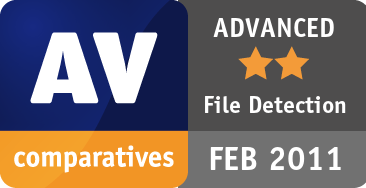 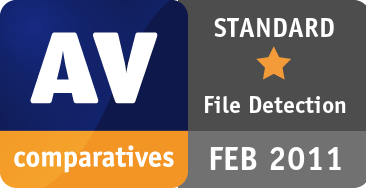 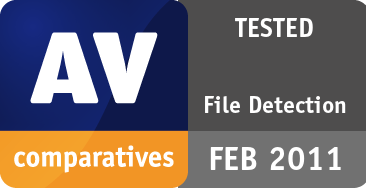 AV-Comparatives prefers to test with default settings. As most products run with highest settings by default (or switch to highest automatically when malware is found, making it impossible to test against various malware with “default” settings), in order to get comparable results we set also the few remaining products to highest settings (or leave them to lower settings) in accordance with the respective vendors. We kindly ask vendors to provide stronger settings by default, i.e. set their default settings to highest levels of detection, esp. for scheduled scans or scans initiated by the user this would make more sense. We also kindly ask vendors to remove paranoid settings inside the user interface which are too high to be ever of any benefit for normal users. As some vendors decided to take part in our tests using the stronger settings (although they know that this will be applied and impact also other tests like false alarm test, performance test, etc.), it appears that the better option would be to go for the stronger settings by default and that is why we recommend users to consider to use those settings too.

This publication is Copyright © 2011 by AV-Comparatives ®. Any use of the results, etc. in whole or in part, is ONLY permitted after the explicit written agreement of the management board of AV-Comparatives prior to any publication. AV-Comparatives and its testers cannot be held liable for any damage or loss, which might occur as result of, or in connection with, the use of the information provided in this paper. We take every possible care to ensure the correctness of the basic data, but a liability for the correctness of the test results cannot be taken by any representative of AV-Comparatives. We do not give any guarantee of the correctness, completeness, or suitability for a specific purpose of any of the information/content provided at any given time. No one else involved in creating, producing or delivering test results shall be liable for any indirect, special or consequential damage, or loss of profits, arising out of, or related to, the use or inability to use, the services provided by the website, test documents or any related data.