The Malware Protection Test is an enhancement of the File Detection Test which was performed in previous years. Due to the increased scope of the test, readers are advised to read the methodology described below. Please note that we do not recommend purchasing a product purely on the basis of one individual test or even one type of test. Rather, we would suggest that readers consult also our other recent test reports, and consider factors such as price, ease of use, compatibility and support. Installing a free trial version allows a program to be tested in everyday use before purchase.

All products were installed on a fully up-to-date 64-Bit Microsoft Windows 10 Professional RS1 system. Products were tested at the beginning of March with default settings and using their latest updates.

The Malware Protection Test assesses a security program’s ability to protect a system against infection by malicious files before, during or after execution. The methodology used for each product tested is as follows. Prior to execution, all the test samples are subjected to on-access and on-demand scans by the security program, with each of these being done both offline and online. Any samples that have not been detected by any of these scans are then executed on the test system, with Internet/cloud access available, to allow e.g. behavioural detection features to come into play. If a product does not prevent or reverse all the changes made by a particular malware sample within a given time period, that test case is considered to be a miss. If the user is asked to decide whether a malware sample should be allowed to run, and in the case of the worst user decision the system will be compromised, the test case is rated as “user-dependent”.

The test set used for this test consisted of 37,999 malware samples, assembled after consulting telemetry data with the aim of including recent, prevalent samples that are endangering users in the field. Malware variants were clustered, in order to build a more representative test-set (i.e. to avoid over-representation of the very same malware in the set). The sample collection process was stopped on the 24th February 2017. 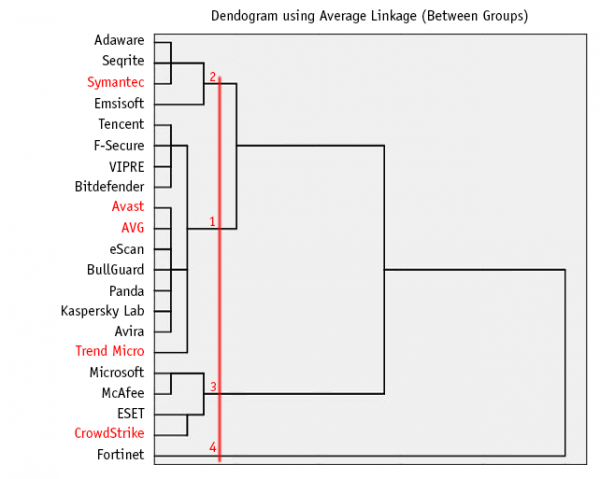 All the products participating in this test achieved high scores (over 99%) relative to simple file-detection tests. There are two reasons for this. Firstly, a representative set of prevalent malware samples is used. Secondly, in addition to on-demand detection, the test includes on-access detection and on-execution protection. Due to the very high overall standard thus reached, the minimum scores needed for the different award levels is also very high compared to other tests.

For readers’ information and due to frequent requests from magazines and analysts, we have also indicated how many of the samples were detected by each security program in the offline and online detection scans.

This Malware Protection Test checks not only the detection rates of the participating programs, but also their protection capabilities, i.e. the ability to prevent a malicious program from actually making changes to the system. In some cases, an antivirus program may not recognise a malware sample when it is inactive, but will recognise it when it is running. Additionally, a number of AV products use behavioural detection to look for, and block, attempts by a program to carry out system changes typical of malware. Our new Malware Protection Test measures the overall ability of security products to protect the system against malicious programs, whether before, during or after execution. It complements our Real-World Protection Test, which sources its malware samples from live URLs, allowing features such as URL blockers to come into play. The Malware Protection Test effectively replicates a scenario in which malware is introduced to a system via local area network or removeable media such as USB flash drives (as opposed to via the Internet). Both tests include execution of any malware not detected by other features, thus allowing “last line of defence” features to come into play.

AV-Comparatives provides ranking awards, which are based on levels of false positives as well as protection rates. As this report also contains the raw detection rates and not only the awards, expert users who may be less concerned about false alarms can of course rely on the protection rate alone. Details of how the awards are given can be found on page 10 of this report. 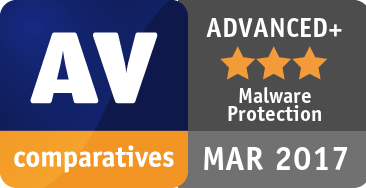 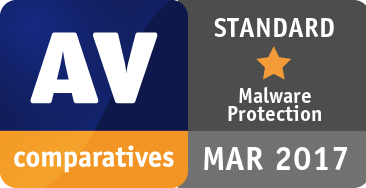 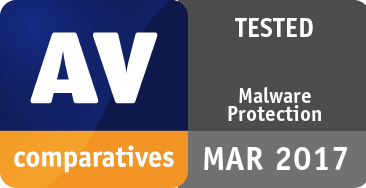 This publication is Copyright © 2017 by AV-Comparatives ®. Any use of the results, etc. in whole or in part, is ONLY permitted after the explicit written agreement of the management board of AV-Comparatives prior to any publication. AV-Comparatives and its testers cannot be held liable for any damage or loss, which might occur as result of, or in connection with, the use of the information provided in this paper. We take every possible care to ensure the correctness of the basic data, but a liability for the correctness of the test results cannot be taken by any representative of AV-Comparatives. We do not give any guarantee of the correctness, completeness, or suitability for a specific purpose of any of the information/content provided at any given time. No one else involved in creating, producing or delivering test results shall be liable for any indirect, special or consequential damage, or loss of profits, arising out of, or related to, the use or inability to use, the services provided by the website, test documents or any related data.