For further details please refer to the methodology documents as well as the information provided on our website.

We want to make clear that the results in this report are intended only to give an indication of the impact on system performance (mainly by the real-time/on-access components) of the security products in these specific tests. Users are encouraged to try out the software on their own PC’s and see how it performs on their own systems.

The following products were evaluated (with default settings) in this test. We used the latest product versions available at time of testing (October 2014). Additionally, Microsoft Windows Defender integrated in Windows 8.1 has also been evaluated.

Please note that the results in this report apply only to the products/versions listed above (e.g. 64-Bit versions, product version, etc.). Also, keep in mind that different vendors offer different (and differing quantities of) features in their products.

The following activities/tests were performed under an up-to-date Windows 8.1 64-Bit system:

The tests were performed on an Acer Aspire XC600 machine with an Intel Core i5-3330 CPU (3GHz), 4GB of RAM and SATA II hard disks. The performance tests were done on a clean and fully updated Windows 8.1 64-Bit system (English) and then with the installed Internet security software (with default settings). The tests were done with an active Internet connection to allow for the real-world impact of cloud services/features.

The hard disks were defragmented before starting the various tests, and care was taken to minimize other factors that could influence the measurements and/or comparability of the systems. Optimizing processes/fingerprinting used by the products were also considered – this means that the results represent the impact on a system which has already been operated by the user for a while. The tests were repeated several times (with and without fingerprinting) in order to get mean values and filter out measurement errors. After each run, the workstation was defragmented and rebooted. We simulated various file operations that a computer user would execute: copying different types of clean files from one place to another (we use around 3GB of data consisting of various file types and sizes (pictures, movies, audio files, various MS Office documents, PDF files, applications/executables, Windows operating system files, archives, etc.)), archiving and unarchiving files, encoding and transcoding (converting MP3 files to WAV, MP3 to WMA and AVI to MP4) audio and video files, converting DVD files to iPod format, downloading files from the Internet, launching applications, etc. We also used a third-party, industry-recognized performance testing suite (PC Mark 8 Professional) to measure the system impact during real-world product usage. Readers are invited to evaluate the various products themselves, to see how they impact on their systems (due to e.g. software conflicts and/or user preferences, as well as different system configurations that may lead to varying results).

Security products need to load on systems at an early stage to provide security from the very beginning – this load has some impact on the time needed for a system to start up. Measuring boot times accurately is challenging. The most significant issue is to define exactly when the system is fully started, as many operating environments may continue to perform start-up activities for some time after the system appears responsive to the user. It is also important to consider when the protection provided by the security solution being tested is fully active, as this could be a useful measure of boot completion as far as the security solution is concerned. Some security products load their services very late at boot (or even minutes later). Users may notice that some time after the system has loaded, it will become very slow for a little while; thus, it initially looks as though the system has loaded very quickly, but in fact the security product just loads its services belatedly, leaving the system more vulnerable. As we find this misleading, we still do not publish boot times in our reports.

Some anti-virus products ignore some types of files by design/default (e.g. based on their file extensions), or use fingerprinting technologies, which may skip already scanned files in order to increase the speed (see comments on page 6). We copied a set of various common file types from one physical hard disk to another physical hard disk.

Archives are commonly used for file storage, and the impact of anti-virus software on the time taken to create new archives or to unarchive files from existing archives may be of interest for most users. We archived a set of different file types that are commonly found on home and office workstations. The results already consider the fingerprinting/optimization technologies of the anti-virus products, as most users usually make archives of files they have on their disk.

Music files are often stored and converted on home systems, and converting such files takes system resources. Because of this, many home users may be interested to know if their anti-virus product imposes a slowdown while converting multimedia files from one format to another. We encoded and transcoded some multimedia files with FFmpeg and HandBrakeCLI.

We installed several popular applications with the silent install mode, then uninstalled them and measured how long it took. We did not consider fingerprinting, because usually an application is installed only once.

Microsoft Office and PDF files are very common. We opened and then later closed some large document files in Microsoft Office and some large PDF files in Adobe Acrobat Reader. The time taken for the viewer or editor application to launch, and afterwards to close, was measured. Although we list the results for the first opening and the subsequent openings, we consider the subsequent openings more important, as normally this operation is done several times by users, and optimization of the anti-virus products take place, minimizing their impact on the systems.

The testers defined the categories by consulting statistical methods like hierarchical clustering, and taking into consideration what would be noticed from the user’s perspective, or compared to the impact of the other security products. As the single performance results are built using clusters, if some products are faster/slower than others this is reflected in the results. We give the mean values (the percentages refer to a system without a security product) of the clusters as an indication only:

These specific test results show the impact on system performance that anti-virus products have, compared to the other tested anti-virus products. The reported data just gives an indication and is not necessarily applicable in all circumstances, as too many factors can play an additional part.

As we noticed that delivering percentages can easily be misinterpreted by users (as well as misused by marketing departments or the press), and percentages would need adjustments when other hardware specifications are being used, we grouped the percentage results by clustering them. The impact within those categories does not statistically differ, also considering error measurements. 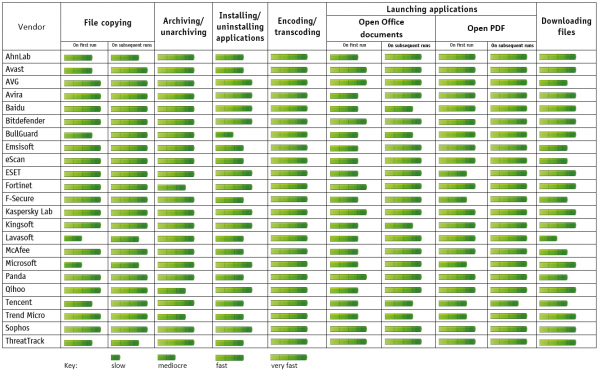 In order to provide an industry-recognized performance test, we used the PC Mark 8 Professional Edition testing suite. Users using PC Mark 8 benchmark should take care to minimize all external factors that could affect the testing suite, and strictly follow at least the suggestions documented inside the PC Mark manual, in order to get consistent and valid/useful results. Furthermore, the tests should be repeated several times to verify them. For more information about the various consumer scenarios tests included in PC Mark, please read the whitepaper on their website.

“Without IS” is tested on a baseline system with Intel Core i5-3330 machine with 4GB RAM, which scores 100 points in the PC Mark 8 Work benchmark. The PC Mark score with active Windows Defender would be 97,4.

Users should weight the various subtests according to their needs. We applied a scoring system in order to sum up the various results.

For “file copying”, we took the mean values, as well as for “launching applications” (on subsequent runs). As in previous performance reports, “very fast” gets 15 points, “fast” gets 10 points, “mediocre” gets 5 points and “slow” gets zero points. The out-of-box system impact score with enabled Windows Defender on Microsoft Windows 8.1 is 9.6. This leads to the following results:

The out-of-box system impact score with enabled Windows Defender on Microsoft Windows 8.1 is 9.6. 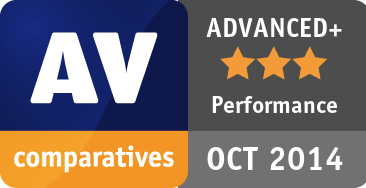 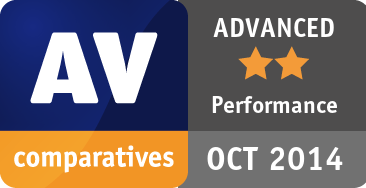 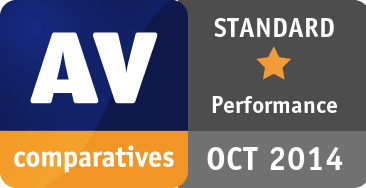 The on-access/real-time scanner component of anti-virus software runs as a background process to check all files that are accessed, in order to protect the system continuously against malware threats. For example, on-access scanners scan files as soon as they are accessed, while (e.g.) behaviour-blockers add a different layer of protection and monitor what the file does when it is already executed/running. The services and processes that run in the background to do these tasks also require and use system resources. Suite products usually have a higher impact on system performance than anti-virus-only products, as more services/features are included and running in the background.

Security products need to be active deep in the system in order to protect it, e.g. to scan processes and so on that are already active during the system start-up, to identify rootkits and other malware. Those procedures add some extra time and thus a delay in system boot/start up.

If a product takes up too many system resources, users get annoyed and may either disable or uninstall some essential protective features (and thus considerably compromise the security of their system) or may switch to security software that is less resource-hungry. Therefore, it is important not only that anti-virus software provides high detection rates and good protection against malware, but also that it does not degrade system performance or trouble users.

While this report looks at how much impact various Internet security products have on system performance, it is not always the security software that is principally responsible for a slow system. Other factors also play a role, and if users follow some simple rules, system performance can be improved noticeably. The next sections address some of the other factors that may play a part.

A few common problems observed on some user PCs: