Many new viruses and other types of malware appear every day, which is why it is important that antivirus products not only provide new updates, as frequently and as quickly as possible, but also that they are able to detect such threats in advance (preferably without having to execute them or contact the cloud) with generic/heuristic techniques; failing that, with behavioural protection measures. Even if nowadays most antivirus products provide daily, hourly or cloud updates, without proactive methods there is always a time-frame where the user is not reliably protected.

The data shows how good the proactive heuristic/generic detection capabilities of the scanners were in detecting new threats (sometimes also named as zero-hour threats by others) used in this test. By design and scope of the test, only the heuristic/generic detection capability and behavioural protection capabilities (on-execution) were tested (offline). Additional protection technologies (which are dependent on cloud-connectivity) are considered by AV-Comparatives in e.g. whole-product dynamic (“real-world”) protection tests and other tests, but are outside the scope of retrospective tests.

This test report is the second part of the March 2012 test. The report is delivered in late July due to the large amount of work required, deeper analysis, preparation and dynamic execution of the retrospective test-set. This year this test is performed only once, but includes also a behavioural protection element.

The products used the same updates and signatures they had on the 1st March 2012, and the same detection settings as used in March (see page 5 of this report) were used for the heuristic detection part. In the behavioural test we used the default settings. This test shows the proactive detection and protection capabilities that the products had at that time. We used 4,138 new malware variants that appeared around the 2nd March 2012. The following products were tested:

What about the cloud? Even in June (months later), many of the malware samples used were still not detected by certain products which rely heavily on the cloud. Consequently, we consider it a marketing excuse if retrospective tests – which test the proactive detection against new malware – are criticized for not being allowed to use cloud resources. This is especially true considering that in many corporate environments the cloud connection is disabled by the company policy, and the detection of new malware coming into the company often has to be provided (or is supposed to be provided) by other product features. Clouds are very (economically) convenient for security software vendors and allow the collection and processing of large amounts of data.  However, in most cases (not all) they still rely on blacklisting known malware, i.e. if a file is completely new/unknown, the cloud will usually not be able to determine if it is good or malicious.

There are two major changes in this test relative to our previous proactive tests. Firstly, because of the frequency of updates now provided by the vendors, the window between malware appearing and a signature being provided by the vendor is much shorter. Consequently we collected malware over a shorter period (~1 day), and the test scores are correspondingly higher than in earlier tests. Secondly, we have introduced a second (optional) element to the test: behavioural protection. In this, any malware samples not detected in the scan test are executed, and the results observed. A participating product has the opportunity to increase its overall score by blocking the malware on/after execution, using behavioural monitoring. The following vendors asked to be included in the new behavioural test: Avast, AVG, AVIRA, BitDefender, ESET, F-Secure, G DATA, GFI, Kaspersky, Panda and PC Tools. The results published in this report show results for all programs for the scan test, plus any additional protection by those products participating in the behavioural test. Although it was a lot of work, we received good feedback from various vendors, as they were able to find bugs and areas for improvement in the behavioural routines.

AV-Comparatives prefer to test with default settings. Almost all products run nowadays by default with highest protection settings or switch automatically to highest settings in the event of a detected infection. Due to this, in order to get comparable results for the heuristic detection part, we also set the few remaining products to highest settings (or leave them to default settings) in accordance with the respective vendor´s wishes. In the behavioural protection part, we tested ALL products with DEFAULT settings. Below are notes about settings used (scan of all files etc. is always enabled) of some products:

F-Secure: asked to be tested and awarded based on their default settings (i.e. without using their advanced heuristics).
AVG, AVIRA: asked us not to enable/consider the informational warnings of packers as detections. Because of this, we did not count them as such.
Avast, AVIRA, Kaspersky: the heuristic detection test was done with heuristics set to high/advanced.

This time we included in the retrospective test-set only new malware which has been seen in-the-field and prevalent in the few days after the last update in March. Additionally, we took care to include malware samples which belong to different clusters and that appeared in the field only after the freezing date. Due to the use of only one sample per malware variant and the shortened period (~1 day) of new samples, the detection rates are higher than in previous tests. We adapted the award system accordingly. Samples which were not detected by the heuristic/generic on-demand/on-access detection of the products were then executed in order to see if they would be blocked using behaviour-analysis features. As can be seen in the results, in at least half of the products the behaviour analyser (if even present) did not provide much additional protection. Good heuristic/generic detection remains one of the core components to protect against new malware. In several cases, we observed behaviour analysers only warning about detected threats without taking any action, or alerting to some dropped malware components or system changes without protecting against all malicious actions performed by the malware. If only some dropped files or system changes were detected/blocked, but not the main file that showed the behaviour, it was not counted as a block. As behaviour analysis only come into play after the malware is executed, a certain risk of getting compromised remains (even when the security product claims to have blocked/removed the threat). Therefore, it is preferable that malware gets detected before it gets executed, by e.g. the on-access scanner using heuristics (this is also one of the reasons for the different thresholds on the next page). Behaviour analyser/blockers should be considered as a complement to the other features inside a security product (multi-layer protection), and not as a replacement.

Below you can see the proactive protection results over our set of new and prevalent malware files/families appeared in-the-field (4,138 malware samples): 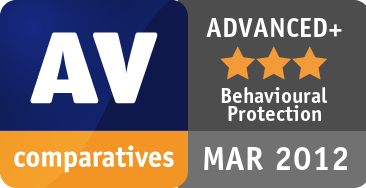 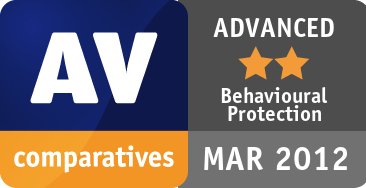 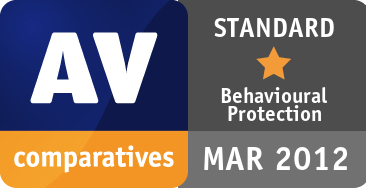 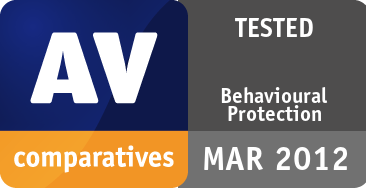