The balance between performance (low speed-impact) and real-time detection

In the past, a common complaint about antivirus programs was that they had a major impact on system performance, i.e. made the PC run more slowly in everyday use. Nowadays, anti-virus products use different optimization techniques to reduce system impact and disruption of everyday tasks.

In this blog post we want to answer the question as to whether any of the performance-enhancing measures taken by anti-virus vendors might have an impact on products’ ability to detect malware under some circumstances. To this end, we checked whether anti-virus products consistently detect malware in specific scenarios.

Finding the right balance between real-time malware detection and performance is challenging. Anti-virus vendors optimize their respective products in various ways to reduce the impact on system performance. Below are some examples of optimizations that could theoretically be implemented in some products. All of them could have a positive effect on performance, but might reduce the detection rates of any malicious files. We do not guarantee any completeness or correctness for the following list, as there are many unknown variables and different implementations which we cannot consider. Only the respective anti-virus vendor could provide exact answers and technical details about an individual product.

How did we test?

Several different typical user actions were carried out on a clean and up-to-date Windows 10 21H2 system, with the respective consumer security software installed (keeping default settings). The test system had an active Internet connection to allow for the real-world impact of cloud services/features. These activities might be seen in day-to-day operations of users, but with the addition of malicious files to the respective scenario. To get a more complete picture of the detection mechanisms offered by each program, we used various techniques to carry out these actions. For example, with the file-copying check, we used different tools and procedures to copy the files. We also considered different locations and directions.

The malicious samples used in this test would be detected by all the tested programs in a simple on-demand scan. The test checks whether these same samples would be detected in the additional specific scenarios listed above.

Please note that the scenarios used for this test are only a subset of the possible scenarios that could be tested. It is not practicable to test every conceivable scenario, given that there are a number of variables (file types/locations, numbers/sizes of files, folder structure, drive type etc.), and that the possible combinations of these variables are unlimited.

The table below summarizes the results for each scenario, showing whether the security programs analyse files for malware during common operations such as file copying or downloading. 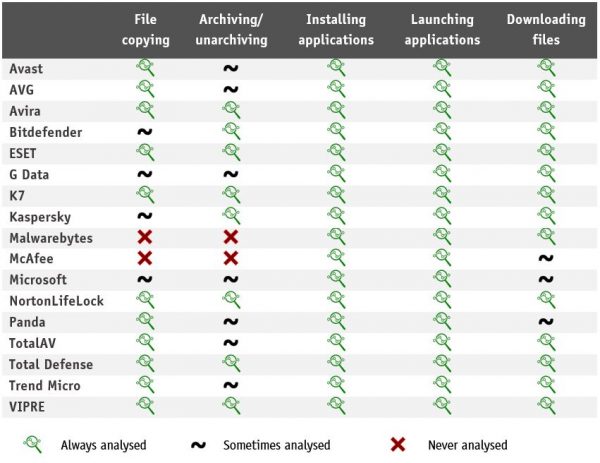 Always analysed: the product consistently analysed files (and therefore detected malware) in the specific test scenario and with the techniques used. The test results show that all products analysed files for malware at least on “Installing applications” and “Launching applications”. Those are the scenarios where malware could directly infect the system.

Sometimes analysed: files were sometimes, but not always, analysed, depending on the circumstances (e.g. program/method used, total number of files, file location) and optimization logic.

Never analysed: the product did not analyse files in the specific scenario and with the techniques used, and so no detection of malware occurred in that case. Malwarebytes and McAfee never analysed files during “File copying” and “Archiving / unarchiving”.

As can be seen in the table above, two of the vendors never scan during copying or archiving. A further seven only sometimes scan during archiving/unarchiving, and a further four only sometimes scan during file copying. However, all vendors scanned on installing and launching applications (meaning that all files are scanned on execution, thus protecting the system). Where we have shown that files are sometimes analysed, this means that scanning is dependent on factors such as file location, program/method used, and whether a single file or multiple files are copied.

The results show that in some circumstances, files might not be analysed – and thus malware not detected – while being processed by the user. This might give the user the incorrect impression that if files they have downloaded/copied/unarchived to their system have not been automatically detected as malware by their anti-virus program, then it’s safe to pass them on to other users.

We understand that users are looking for very fast anti-virus products, and that vendors try to optimize performance as much as possible without affecting security. However, we feel that vendors could be more transparent, where possible, on how detection-performance trade-offs are implemented, so that users can take this into account. If an AV program does not monitor some file operations, as a means of achieving better performance, we suggest that vendors could communicate this to users clearly (this could be done e.g. during the program’s installation process). Some products are able to find the right balance between security and performance.

We suggest that ideally, AV programs should have default settings that put more emphasis on detection than performance, so as to improve security for non-expert users. Clearly explained, granular configuration options could then allow power users to disable detection in some specific scenarios.

As the test results show, some products might not analyse files consistently, or even at all, during e.g. certain file copying scenarios. Therefore, we recommend running an on-demand scan of any files that might be malicious (or even your entire system). While this might also have its limitations, an on-demand scan usually analyses files in greater depth than the real-time analysis used when files are e.g. copied, downloaded or unarchived. If possible, the scan should be run with an active Internet connection, so that the AV product can access its cloud services, thus often greatly improving detection rates.

The information given in this article can help users to put results from performance tests in relation, which use common real-world scenarios. Please visit our website for protection and performance tests.