Smartphones represent the future of mobile telephony. In April 2013 they exceeded 55% of the mobile phone market1, and will surely replace conventional mobile phones sooner or later. For many people, such devices are much more than just telephones. They can be used for Internet banking, Facebook, taking and storing photos, organising one’s entire life. This brings some risks; the same features that benefit the user make the devices attractive to criminals. Smartphones can be infected with malicious software, and sensitive data can be stolen. Phishing attacks work just as effectively with smartphones as with any other device.

The products listed below were tested for this report. The manufacturers either provided us with the newest versions of their respective products, or confirmed that the latest version was available from the Google Play store (as at July 2013). After the test, the manufacturers were given the opportunity to rectify any errors we found in their products. We have noted in the report any problems that have subsequently been fixed.

This year, we have once again tested security products for mobile phones running Google’s Android OS. This report contains details of products by leading manufacturers that agreed to have their products tested. The test was carried out in July and August 2015 on an LG Nexus 5 smartphone running Android 5.1.1.

The security products were updated and tested on the 13th July 2015. The test was conducted with an active Internet connection on genuine Android smartphones (no emulators were used).

We also carried out a false-positive test. The top 100 apps from Google Play that are not supported by advertising were used for this. None of the security products tested produced any false alarms with these 100 clean apps.

The malware used in the test was collected by us in the four weeks prior to the start of the test. 2,947 malicious applications were used to form a representative test set. So-called “potentially unwanted apps” were not included. The security products were updated and tested on the 23rd of July 2013.

Due to its high and rapidly growing market share (currently 74.4%), we have once again used Google’s Android operating system to test mobile security software (no emulators were used). The test set consisted exclusively of .apk files. Each individual app was manually installed; this was done to test which technologies were employed by each security product to protect against malicious apps. 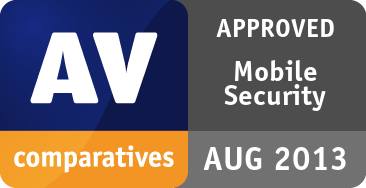 The mobile products of Baidu, Kingsoft, Qihoo 360 and Tencent are currently only available in Chinese. The full reports on these products are thus only included in the Chinese version of the review, available on our Website.