In January 2014, ZDNet and other sourcres reported the existence of cross-platform botnet software that installs by exploiting a vulnerability in Java SE 7 Update 21 and earlier. It can infect Windows, Linux and Mac OS X computers running the affected Java versions. At about the same time, ZDNet also reported that the Flashback botnet, which it claims had infected over 600,000 Macs in 2012, was still in existence, albeit with a much-reduced number of infected machines (22,000). Reports such as these should serve as a warning to anyone who believes that the Mac OS is immune to malware attacks and that Mac users do not need to consider security issues.

For a sensible discussion of the subject, it is necessary to understand that a computer virus is only one of a number of different types of malware (malicious software). These days, viruses make up a small percentage of all known malware; Trojans (e.g. malicious programs disguised as games or music files) are much more common. Whilst the number of actual viruses affecting Mac OS X may be negligible or even zero, Mac systems clearly can be infected by Trojans, if users are fooled into installing them. Please note that nearly all manufacturers still call their products “antivirus”, although in reality they protect against all types of malware, including Trojans.

Experienced and responsible Mac users who are careful about which programs they install, and which sources they obtain them from, may well argue – very reasonably – that they are not at risk from Mac malware. However, we feel that non-expert users, children, and users who frequently like to experiment with new software, could definitely benefit from having security software on their Mac systems.

As with Windows computers, Macs can be made safer by employing good security practices. We recommend the following:

We have reviewed and tested the following products for this report, using the newest version available in July 2014:

The test was conducted on the 14th July 2014. All participating vendors have by now updated their definitions so that they recognise all the Mac malware samples used in our test. We congratulate those manufacturers who took part in the public test, as we feel their commitment is a valuable contribution to improving their products and thus preventing the spread of cybercrime.

A more complete list of available antivirus programs for the Mac can be seen here.

In addition to the interface review described above, we have also conducted malware protection tests to see how effectively the Mac security products protect the system against malware. For this test, we used 65 recent and prevalent samples of Mac malware that are not blocked by Mac OS X Mavericks itself. All are distinctly malicious, functioning programs and were seen in-the-field in 2014. As usual, we did not include any potentially unwanted or grey samples (adware, hacking tools, etc.) in the set. We also excluded component files (which could be in the thousands) as these cannot run and do not pose a risk by themselves; certain magazine tests tend to use such files just because they are detected by various products, but we consider inactive components to be irrelevant. We ended up with a test set consisting of 65 malicious Mac apps found in-the-field that pose a risk to users, and should be covered by Mac Security products. In our opinion, these 65 malicious Mac apps represent a substantial part of all in-the-field Mac malware from the first half of 2014.

The number of malicious programs that can currently attack Mac OS X Mavericks is very limited. However, as most Mac systems do not run any third-party security software, even these few threats could cause widespread damage. Precisely because a Mac security product only has to identify a small number of samples, we would expect it to protect the system against all threats that have not yet been blocked by OS X itself.

Before the test, the Mac OS X was updated and an image created; no further OS X updates were then applied. Each program was installed on the freshly imaged machine and the definitions updated to the 14th July 2014. The Mac remained connected to the Internet during the tests, so that cloud services could be used. A USB flash drive containing the malware samples was then plugged in to the test computer. At this stage, some antivirus programs recognised some of the samples. We then ran an-on demand scan of the flash drive, either from the context menu if available, or from the main program window if not. Samples found were quarantined or deleted. After this, we copied the remaining samples to the Mac’s hard disk. Any samples not detected or deactivated by the scan or real-time protection were then installed and executed, providing the security product with a final chance to detect the malware.

There was also a false-positives test, in which 100 common, safe Mac programs were obtained from a popular download site and scanned by the antivirus program.

Most of the Mac security products in our review claim to detect Windows malware as well as Mac malware, thus ensuring that the user’s computer does not inadvertently act as a conduit for programs that could attack Windows PCs. For this reason, we also checked if the Mac antivirus products in our review detect Windows malware. We used 500 very prevalent Windows malware samples; the procedure was identical to that for Mac malware, except that we did not make any attempt to run any of the samples that were not detected in the scan, as Windows programs cannot be executed under Mac OS. With the exception of Intego, all the programs detected all the Windows malware samples.

Seven of the products we have reviewed receive our Approved Security Product award. Unfortunately, we were unable to give Kromtech MacKeeper an award, due to limited Mac malware protection and puzzling system analysis.

The test covers protection against Mac malware and detection of Windows malware, while the review looks at ease of use and help functions. Potential users should also consider additional features and price before choosing a product. We always recommend installing a trial version of any paid-for product before making a purchase. 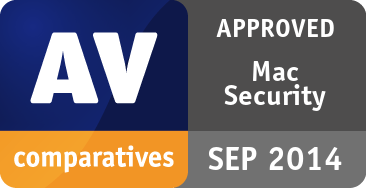