As part of its ongoing consumer main-test series, AV-Comparatives has just released the latest test results for real-world and malware protection for February and March 2021. The Austrian antivirus testing lab conducts systematic testing of security software solutions to protect consumers against cyber crime. Certification by AV-Comparatives is considered to be a globally accepted yardstick for the approval of software performance.

The Real-World Protection Test results released by AV-Comparatives are based on 354 live test cases including working exploits and URLs pointing directly to malware. The test-cases used cover a wide range of current malicious sites, highlighting the quality of protection offered by various products. This AV-test by AV-Comparatives provides detailed insights into the actual capabilities of as many as 17 popular anti-virus products. The results of the false-positives test are also available in the factsheet. The full results, covering four months of on-going testing, will be published in June.

“Our Real-World Protection Test is currently one of the most comprehensive and complex tests available, using a relatively large number of test cases. Currently, we are running this test under updated Microsoft Windows 10 Pro 64 Bit with up-to-date third-party software.”, said Peter Stelzhammer, co-founder of AV-Comparatives. “Every few months, we update the charts on our website showing the protection rates of the various tested products over the past months. The interactive charts for February and March 2021 are now available on our website.”

AV-Comparatives has also released the results of its Malware Protection Test for consumer security solutions. 17 popular anti-malware apps were evaluated to assess their ability to protect a system against infection by malicious files before, during or after execution. In addition to detection rates, the test also examines a product’s ability to prevent a malicious program from making any changes to the system. The test set used for this test consisted of 10,013 malware. To ensure that the tested programs do not protect the system at the expense of high false-alarm rates, a false-positives test is also run. 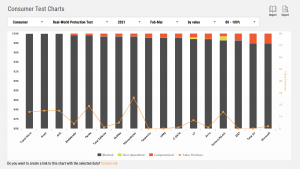 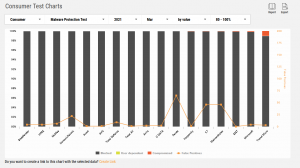