Have you ever tried to remove a program from your computer, and found that bits of it were left behind? If so, you will realise that not all uninstallers remove their programs completely, and that the leftovers can cause problems like error messages and wasted disk space. In the case of antivirus programs, which are deeply integrated into the Windows operating system, an incomplete uninstallation can be particularly problematic. It might be impossible to install a new AV program if its installer finds traces of the previous product. So, if you need to remove one AV product in order to install a different one, the issue of AV uninstallation becomes important.

On paper, removing any program from your Windows computer is straightforward. You just go into Control Panel > Programs and Features > Uninstall, and select the program you want to remove. You should be able to use this process to remove an antivirus program. However, some antivirus software can leave files, folders or registry entries behind on your system. This can lead to problems such as start-up errors, or conflicts with other software.

Antivirus programs often install additional applications with them. For example, when you’re installing Avast, it will also install the Avast Secure Browser. Similarly, Kaspersky installs a password manager and VPN, and Panda installs the Opera browser. In some cases, you might be given the option to remove these using the standard uninstaller. However, the uninstaller sometimes only removes the core antivirus application, leaving these additional apps behind on your system and eating up your storage space. This test found that some AV programs can leave behind registry entries and files of up to 600 MB on the system after uninstallation.

Where to start with uninstalling AV programs?

In the test, we found that the default uninstaller of most of the tested products will almost completely remove the respective products. Hence, it would seem advisable to try this method first. In the case of additional programs, these can be removed using their own uninstallers, via the app lists in Control Panel or Settings. If the default uninstallation should fail, or leave behind significant leftovers, an alternative uninstaller is provided by most vendors.

How could AV uninstallers be improved?

We encourage vendors to extend the functionality of their uninstallers, so that they remove additional programs, browser extensions and so on. We also feel that in some cases, better help facilities could be provided for the uninstallers. 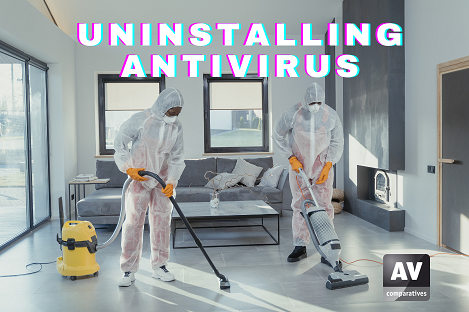